We’re now in the midst of the largest refugee crisis since WWII. About 50 percent Syria’s pre-war population of 23 million are either listed as refugees with the U.N. High Commissioner for Refugees or displaced within the country and trying to get out now. Countries across the world are stepping up to help. Just recently, President Obama ordered his administration to accept at least 10,000 Syrian refugees for resettlement in the United States in the next fiscal year. 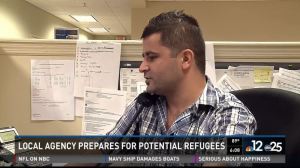