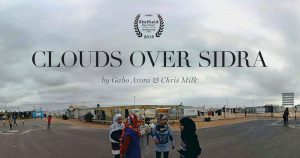 Almost two years ago, in his 2015 TED Talk  Chris Milk spoke about how his company Within was using virtual reality and the power of immersive storytelling to create empathy, and thus change the way humans connect. To demonstrate this power, Milk showed how he used then newly-emerging VR technology in his film Clouds Over Sidra to virtually transport an entire group of United Nations officials at the World Economic Forum to a Syrian refugee camp in Jordan.
Milk said his experiment, and the UN officials’ profound reaction to his short film, proved the potential of VR’s power for persuasive communications. According to Milk, it showed that “VR is not a video game peripheral. It connects humans to other humans in a profound way that I’ve never seen before. It can change people’s perceptions of others.”
In light of news events now happening in the United States, the ability to inspire empathy and connect humans may be more valuable now than ever before. It may be time for professional communicators and others to revisit Milk’s Clouds Over Sidra, and for us to consider how — with major tech companies like Facebook, Tinder and VideoAmp exploring the possibilities — VR promises new and powerful ways for brands to engage emotionally with target audiences.
On January 30, 2017   /   DC News